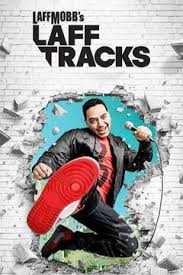 Posted at 17:38h in Comedy by Meshelle 0 Comments
0 Likes
Share

Produced by Def Comedy Jam co-creator Bob Sumner and hosted by DJ and comedian Cipha Sounds, truTV is flipping comedy on its head with Laff Mobb’s Laff Tracks, a new half-hour series where the next generation of comedians brings their hilarious personal stories to life with a playful reinvention of stand-up. From tales about janky doctors, gaining weight, and reminiscing about old school beepers, to riffs on relationships, careers, flying, and even church, Laff Mobb’s Laff  Tracks knows no bounds.

MESHELLE will be featured on this groundbreaking comedy series alongside some of the funniest comedians in the business.  Be sure to catch her on episode 110 on March 7, 2018 11pm (EST).  It promises to be unforgettable!